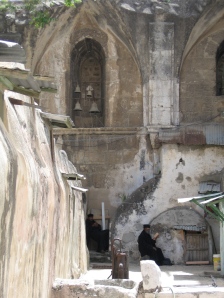 The day trip from Amman, Jordan to Jerusalem started with a taxi ride to the Jordanian border followed by:  passport stamped, fee paid, shuttle bus from Jordanian border to Israeli border, 2 checkpoints(1 Jordanian and 1 Israeli), Israeli immigration, 3 more security checks with x-rays and passports checked each time, military patrols carrying machine guns throughout the buildings and another bus to another Israeli checkpoint.  After officially entering Israel,  I found a taxi driver who showed us(met a woman who worked for a NGO in Amman and she joined me on this excursion) the sites of Palestine, Jerusalem and Jericho.

A side note on this spontaneous little excursion:   Since my passport now has a Israeli visa entry stamp, I cannot enter any Arab country with this passport.    Also, I thought American security was horrendous in boarding planes etc.; well, the Israeli crossing is now at the top of the list.

Holy Week in Jerusalem is NOT the time to visit if one wants to avoid the crowds and experience Jerusalem in a “sane” manner.   Police everywhere, Christian/Greek Orthodox/Muslim/Jewish faiths demonstrating their presence by bells/Byzantine mosaics/mosques,

tiny streets with shops selling olive wood crosses to “All I got was a T-shirt from Jerusalem” t-shirts to spices, the taxi driver not leaving us for one minute for fear of losing us in a MASS of humanity, Palestinian checkpoints, close to being trampled by people pushing the crowd limits for a view of the tomb of Jesus Christ – all of this did not lend itself to the phrase “spiritual experience”  nor a description for the two words Holy Land.  I left with the feeling of “So, Lis, did you try to cram in too much in one day?  What do you think?”  Glad I went, but, wish it was at a different time…..

Twenty four hours later…Mykonos Island greeted me….and talk about a “disconnect” in a chain of travels — desert to sea, war-torn areas to passengers disembarking from cruise ships, bedouins and Petra to fisherman and white houses with blue shutters.   “Party all night in Mykonos” = the Mykonos scene.  A few days later, a high-speed ferry that looked like it came off the TV show “MIAMI VICE” sped passengers thru the Mediterranean Sea and I landed in Paros.   8 passengers including myself disembarked and the remaining 272 people remained on board and continued on to Santorini.

From Parikia, the primary port on the island of Paros, I traveled 12 kilometers on windy roads, past white houses with bright blue shutters, olive groves and vegetable fields, and the taxi dropped me off at Villa Konikotopoaulus(THAT name just rolled off the tongue..) in the tiny town of Alykia.  The five-minute walk thru town took me past 8 tavernas and restaurants, 2 little markets, 1 soft drink stand which also sold bus tickets and stamps, a small tourist oriented shop and benches lining the walk along the Mediterranean Sea.  By the time I walked back to my hotel, I was sure word got around to the local population of 300 people a new tourist was in town.

I “googled” Yoga Greece and up popped “Special – 5 days – yoga classes – May 1st”.   So, “why not?” entered the mind, “still the off-season in Greece, 20€ for a hotel including full breakfast” and here I am in Alykia, Paros Island, Greece.

purchasing new cups to hold the cappuccinos’, writing on new menu boards subsequently placed outside the tavernas, the rent-a-car establishment washing its only car(!)

, all the locals still in really good moods and genuine smiles on faces as the occasional tourist drives into town signaling the beginning of Greece’s tourist season.

A Dutch yoga teacher, who lives in the town, is teaching Hatha yoga to 8 students from Holland and myself 2x a day for a total of 4 hours.   My constant quest continues of loosening up the body, asking energy to flow thru old broken bones, the teacher saying “Do what you can” and the body responding with “Well, it ain’t much!” and then screaming “you-have-got-to-be-kidding-me-if-you-think-I-can-do-that-Yoga-pose”, followed by muscles/ligaments crying “Good luck on THAT pose, kid.”

After morning class, it is off to coffee at a restaurant that I cannot pronounce nor spell, and THE BEST small grilled spicy lamb patties or freshly caught grilled fish served with french fries for $5.00

Island exploration is possible via the various buses.  Walks on the rocky coast and seeing that occasional patch of sand is a treat, friends from Rome will visit for a few days in mid May, the sun is shining more and more, and spring’s cool weather and cloudy days are slowly disappearing …. and, “I am staying put”, as my mother would say, for a while.  So, on that note, I will watch spring disappear and summer seep into the Greek Isles….