“Whew!” we all say in unison. “We have done some traveling since our last post.” Mabel has decided she will write the first in a series of posts about the last few weeks.

MABEL: All I can is “I survived.” I rolled over 460 miles of dirt, gravel, pebbles, tar based gravel, rocks, pot holes, washboard, six-foot-built-up ‘cuz of permafrost, no guard rails, narrow, emergency airstrips occasionally, one gas station only and you-better-have-your-pocket-book-read ‘cuz this-guy-knows-he-has-the-only-service-staton-on-the-road..  Oh, and then I got to do it again going back because the road dead-ends at the Arctic Ocean!

Before we embarked on this journey, let me tell you how we arrived. We drove from Fairbanks, AK to the Top of the World Highway and arrived in Dawson City, Yukon, the focal point of the 1896 Klondike Gold Rush, on July 17, 2017. That road ended at the Yukon River. No, I mean it ENDED at the river. We drove onto the ferry, I was first in line by the way. 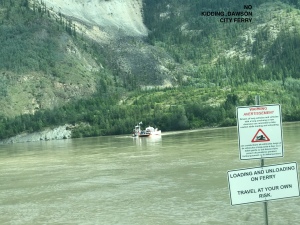 Ten minutes later we were in Dawson City.  As with most most boom towns, it had its heyday beginning in 1896 which lasted until around 1906 when it began to fade out. Gold was still mined but other mines had been discovered, as well as silver in the Keno area, and Dawson became more a supply terminal for the river mining communities with the steam powered paddlewheel boats navigating the Yukon and Stewart Rivers. The townspeople have restored the original buildings and the wooden sidewalks to retain the historical feel of that era. Mid-May thru early September are now the boom-or-bust months for the tourist shops and the population tops at 1400; by October, the population drops to 400 permanent residents. 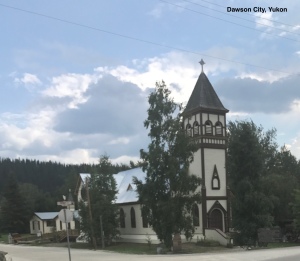 Twenty-five miles east of Dawson City begins the Dempster Highway, which ends at Inuvik, Northwest Territories. Currently, since the winter ice road is no longer dependable as a hard-freeze road, a new land road is almost completed connecting Inuvik to Tuctoyatuk (that name just rolls right off the tongue, doesn’t it?) Then, it will be the end of road with the waves of the Arctic Ocean lapping at Tuctoyatuk shores. 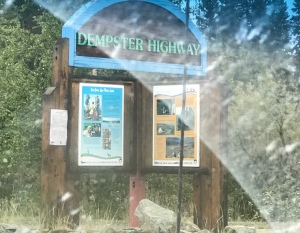 Signage like the top one usually elicit “Which way should we go, Alice?” This why we have maps: iPhone google map, iPhone Apple map, Garmin built-in Navigation System AND a compass just to make sure we are going in the right direction!  We see the sign through the filthy windshield and off we go.  Passing the Tombstone Park, which is a unique wilderness of rugged peaks, permafrost landforms and abundant wildlife, all reflected in a rich First Nations culture, I hear, “We’ll stop there on our way back” with the gas pedal pressed firmly down. http://www.env.gov.yk.ca/camping-parks/tombstonepark.php

Before I forget, why are we going? Because there is a First Nation Art Festival there and where else could we buy beaded indigenous dolls and tiny carved stone bears in this huge country with Craft Stores everywhere; and number two, the Dempster Highway is the worst road in the Yukon so let’s try it……..

So off we go on our photo journey… 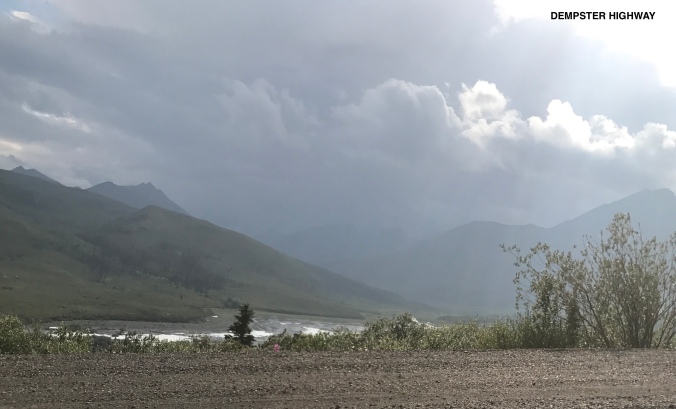 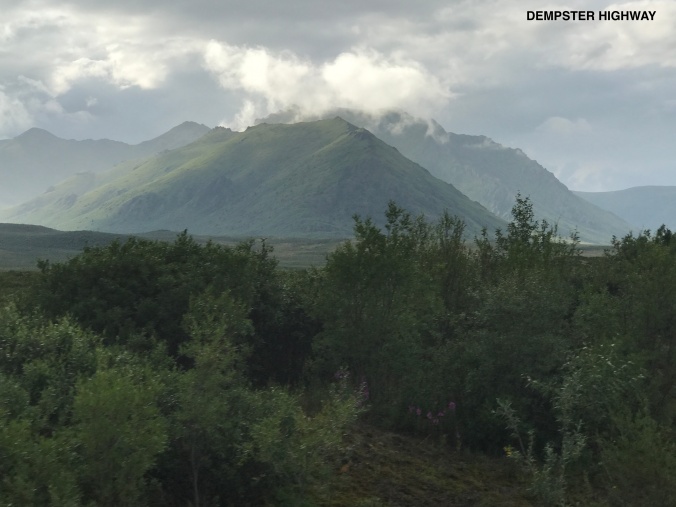 I though this might be mist, but it was smoke from a fire, which had enveloped the area.

We blithely drove on ignoring the burnt stench of trees, mud and limiting visibility.

Surrounding us were burnt trees. We spent the nite at a road pull-out area and left early in the morning. Twenty-two hours of light was now the standard.

One lone grader on 460 miles of dirt road. See the line that goes from left to right on the photo? That crack is from rocks thrown up by rucks hauling supplies, fuel, lumber and commodities to Inuvik.

I have no problems now with the ferries. Two or three ferry crossings on this road.

We arrived in Inuvik after passing through some gorgeous unspoiled country. Inuvik reminded me of Sci-Fi movie location. Stark. Isolated. Bleak. No trees or foliage. The metal sided buildings stood three to four feet above ground due to winter snow accumulation. Alice and Lisa walked through the town on the metal spiked sidewalks.

The Inuvik bead work is beautiful and finely detailed. As we left town, we passed the round sided Catholic church and the new Arctic Research Center.

460 miles in one day got us back to Dawson. Crowds milled in the streets because the The 36th Annual Dawson Music Festival was on. There was everyone from soloists to bands, reggae to rock ‘n roll and Dawson was rocking.

The next day I hear, “Mabel needs to go to Canyon Ranch Spa and get cleaned up.” My thoughts:

I have been exfoliated by gravel, sand and tar.  I have been cleansed by mud that would rival the denseness of the Dead Sea.  I rolled over and bumped over and fell down/got up on more washboard roads than I ever thought existed.  My body is so crinkled that no laser or facelift in the world would help.  Nope, send me to an Ayurvedic Clinic with oil, massage, more oil and no movement whatsoever!

Hope you enjoyed this monologue about the Dempster Highway. It goes through gorgeous and unspoiled country.