The going from Base Comeau, Quebec had been slow to Labrador City, Labrador and did not change on the way to Goose Bay, Labrador. (1,115 km or 692 miles)  Potholes, washboard, and muddy roads combined with workers and stop signs and red/green lights constantly caused us to stop or slow down. Patience was becoming a thing of the past, which resulted in pulling over around 2:00pm at a rest stop which had nature walk to Hamilton Falls. 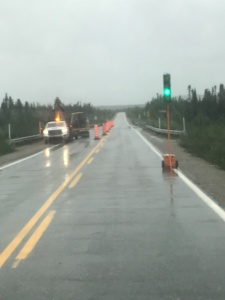 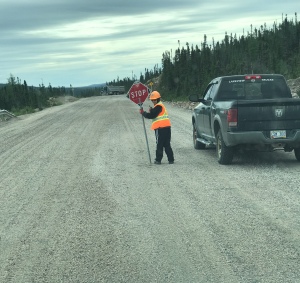 My back and neck complained vigorously but I was able to alleviate some with Cat/Cow stretches and rolling the shoulders plus ADVIL! Alice was driving me nuts with her wanting to get out so the Nature Trail looked beyond inviting! 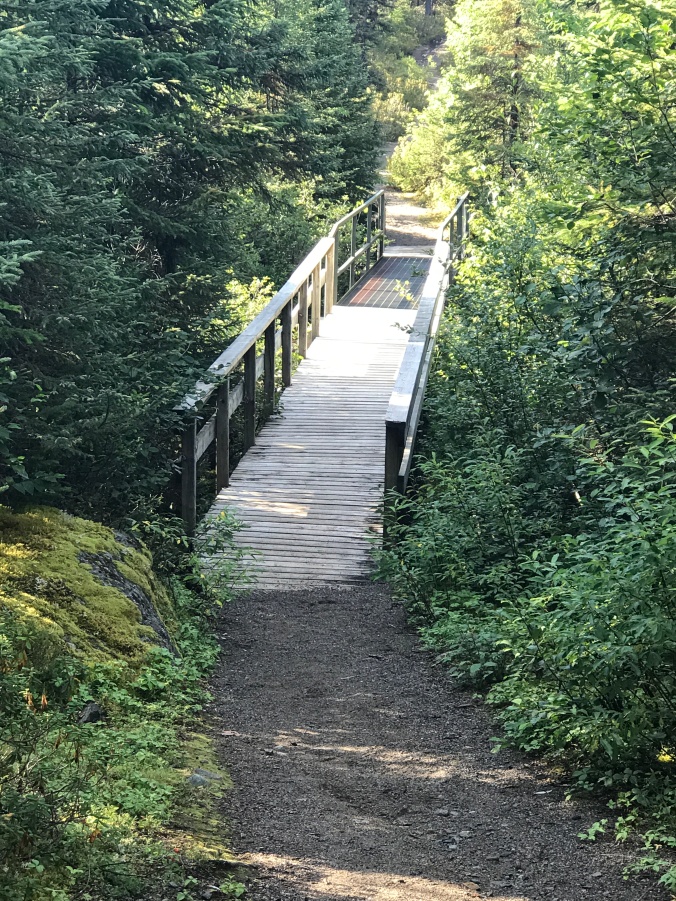 The wooden bridge, which are frequently found at trail heads, is our entrance to this 1.5 km walk. Labrador is laden with lakes, streams, and rivers. Because of this, this Trans Labrador Highway has huge culverts to funnel the water so roads can built over the running waters and bridges are the only way to get access to the internal beauty of the land. 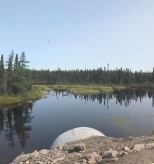 Dense and dark is the only way I can describe it. Vines and roots crawl over the ground in search of free spot to drop a tentacle. Lichen, moss, tiny, thick, tough succulents carpet the ground and make homes on exposed tree and vine roots. Mountain adler, spruce, pine and birch compete in clumps on the hills and mountain side only distinguishable by their color. Sounds of trickling water surrounded us and erased the tires-meeting-the-road dull monotonous tone.

My skin felt so good with the moisture and that woody smell finally cleansed the interior van odor that happens after weeks and weeks of traveling. Low growing succulents cannot compete with the tiny white flowers and white-lichen type moss. Then I looked to the right and I saw the beginnings of the water fall. Two huge hydro-electric dams are in process of completion and that is causing the appearance of more the rivers’ rock beds. 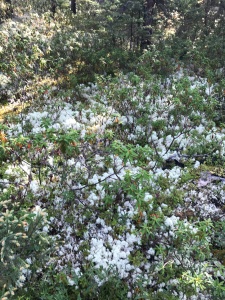 Notice the small fern by the red berries – these grow into large plants, which I had to touch to make sure they were real and not just transplanted from some office! 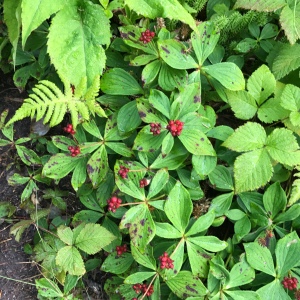 Alice and I kept walking along, scuffing the carpet of leave on the trails to have the musty smell in the air. Alice could have cared less about smells and she ran like bears were after her releasing the miles and miles of pent-up energy. She could have cared less if she trampled on tiny red berries or baby ferns or the low growing pine ground covers. I looked over to the left and a break in the trees with a meadow.  It was a treasure trove of sights and sounds encompassing me.