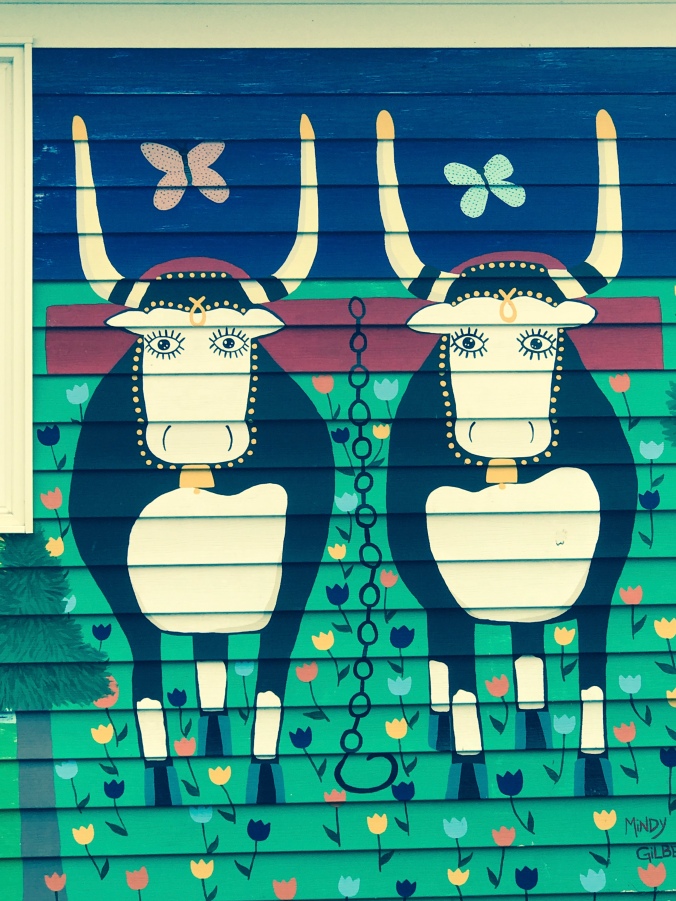 A 2017 movie, Maudie, gives the history of the woman who painted this sign by the Visitor Center in Digby, NS.

I am spending the last nite in Canada at a road’s end on a deserted beach by the Gulf of St. Lawerence. The water goes back and forth on the inlet’s shore, leaving bits of debris and taking bits of sand back into the slate blue liquid. Dried-out washed-ashore sea grass form long stretches of low berms just beyond the water’s reach. Sand, rocks, pebbles and sticks, which crackle when I step on them, litter the forgotten background.

The water’s mesmerizing tone seeps into and subsequently calms my brain, washes away thoughts and relaxes the body. That repetitive sound helps me become one with the water and its smell and its moisture and its vastness. On this tiny stretch of wild beach, a shawl of sadness begins to wrap me as I think about leaving Canada and her welcoming people and gorgeous landscapes. The US, filled with a populace with polar opposite beliefs and anger and fear, isn’t appealing yet it is my home. My mind returns to here, this tiny spec of land and the peace it holds.

There is no-one else at this little spot, it is Friday nite. Most likely teens will be coming out once the sun sets. They’ll see Mabel, rev their ATVs, mutter a few words better left unsaid and go back into town. For now, I can sit on the camp chair, tea in hand, watch Alice run back and forth, gaze at the sparkling lights down the coast and reflect over the last 4 1/2 months. 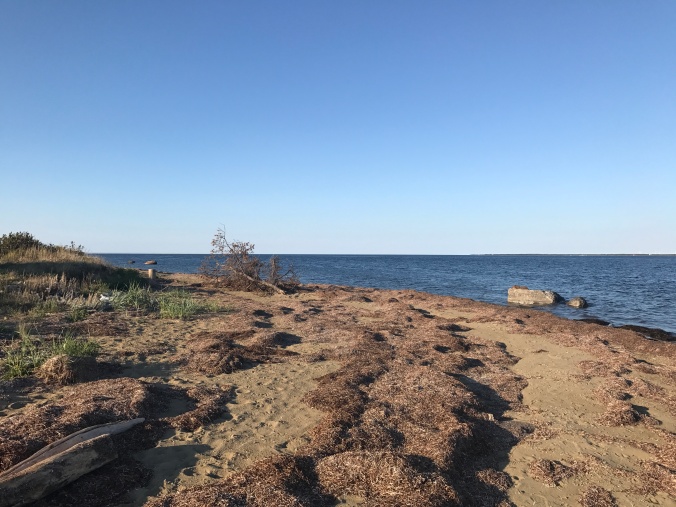 Travels through Nova Scotia will be some of my most cherished memories of this road trip. A ferry ride took us from Newfoundland to No. Sydney, Nova Scotia and we promptly headed up the Cape Breton Coast. Some refer to it as the Highlands of Nova Scotia which I understand now after I saw signs McDonald’s Lane or Thomas McInnes and signs in Scottish Gaelic: Ceap Breatainn or Eilean Cheap Bhreatainn – Cape Breton. https://en.wikipedia.org/wiki/Cape_Breton_Island

Mabel, true to form, kept Alice and I on the Cabot Trail, which traversed the Cape Breton Highlands National Park. Cliffs, drop offs, sandy beaches, little towns and shops, rental cottages and renovated homes lined the the road. Roads led to trails that gave even the most casual of hikers a glimpse of the sea. Seals draped the smooth rocks and bald eagles flew above them. It was magical.

I passed restored houses, which reinforced my perception of the next generation’s migration. This movement has been apparent throughout my travels of Newfoundland, Nova Scotia and New Brunswick. Entrepreneurs, young families, close-to-retirement age people and the more prosperous populous moving and looking for a more intimate community. 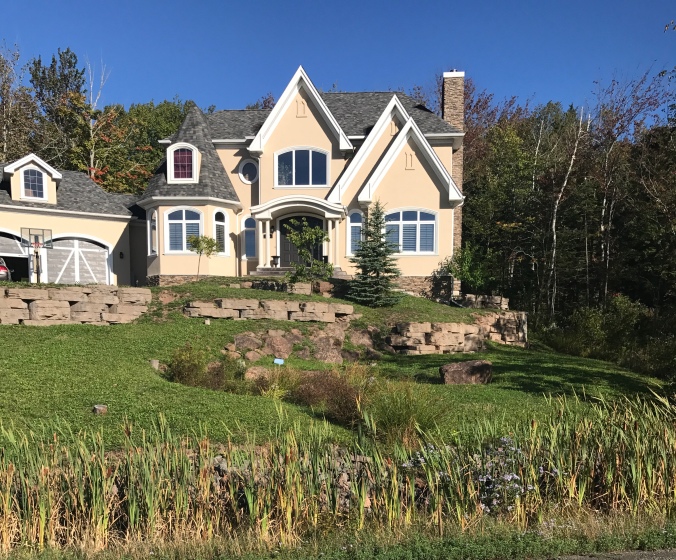 This casual little cottage in New Brunswick elicited a “Good God!” from me! But there are others not quite as grand in both Provinces.

And the above homes, replaced so many houses that looked like this: 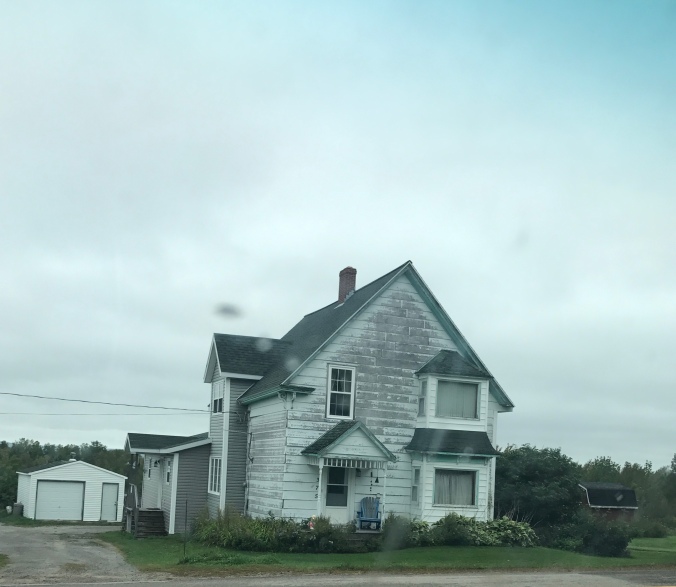 Blueberries are a particularly important crop for Nova Scotia, but both provinces claim to be BLUEBERRY CAPITOLS since I passed two signs claiming that fame! One camping spot in Nova Scotia yielded blueberries for my morning’s oatmeal! 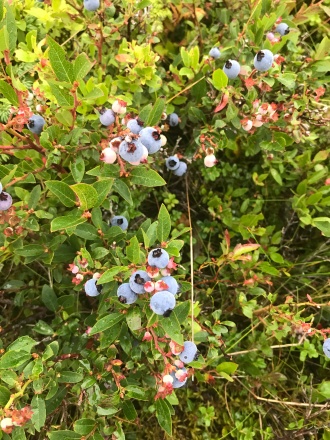 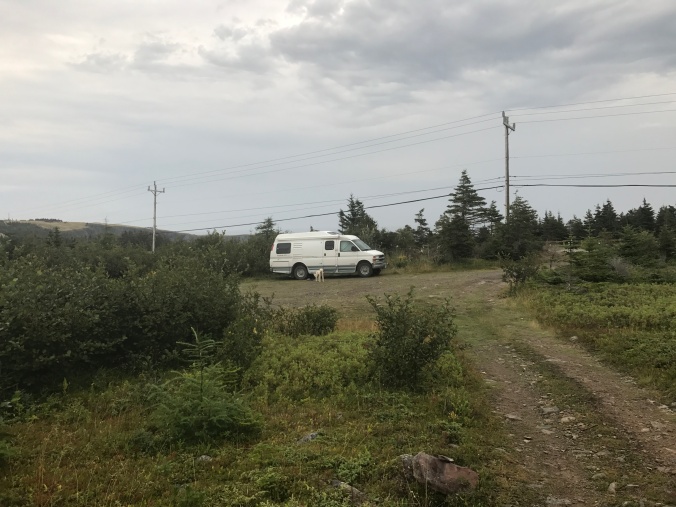 The interminable search for back roads was always there so we went into Nova Scotia’s interior, their agricultural farm land. Dairy cattle grazed on thick grass and were brought into sheds twice a day for milking.

New found friends invited me to stay with them and Mabel fit nicely in their drive. It was wonderful to have some home cooked meals and learn more about the Atlantic Provinces. Such kind folks! 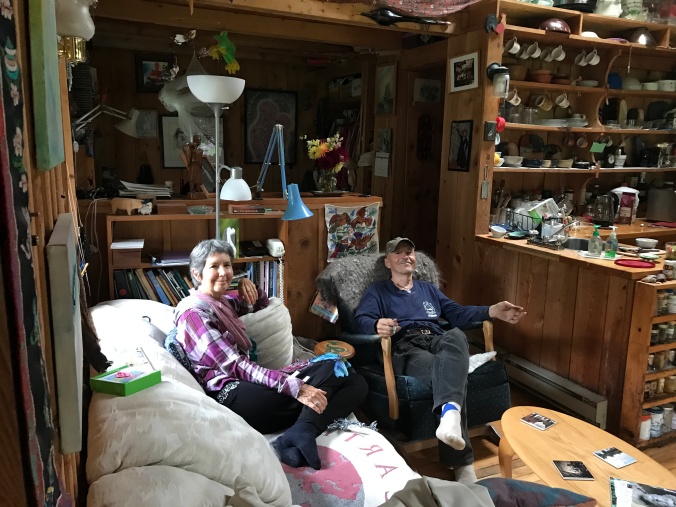 From their house I continued up the northern coast of Nova Scotia to the restored historical towns of Annapolis and Shelburne, which share the history of the British. Loyalists.http://www.npr.org/2015/07/03/419824333/what-happened-to-british-loyalists-after-the-revolutionary-war 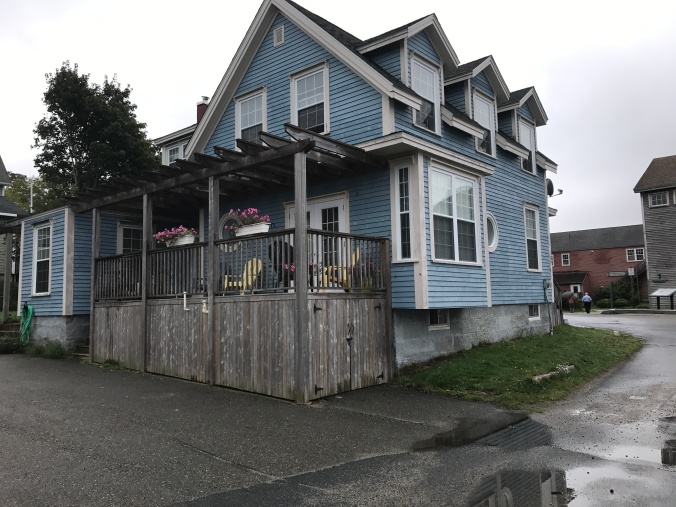 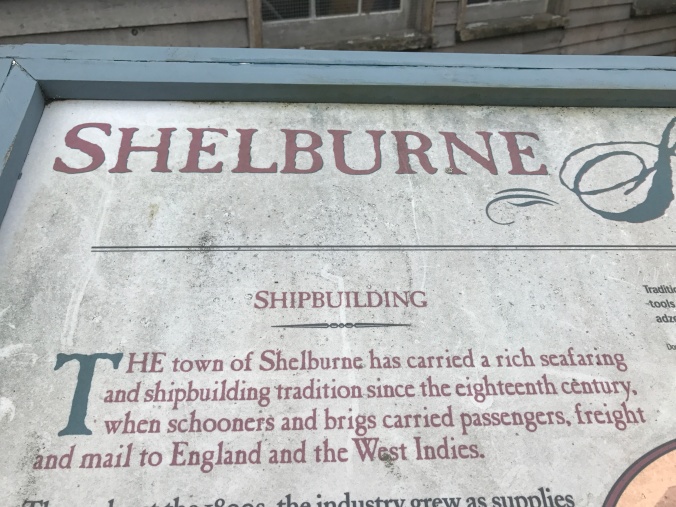 I lasted one day in the city of Halifax to take Alice to the vet for an ear infection and continued on to New Brunswick. There were too many people and cars.

There’s an old cowboy saying, “Well, it has been a good ride, time to head home.” I felt it today as drove along the New Brunswick coast. That edge sensation–being on the cusp of every minute because something new is around the corner–that feeling had left me. New Brunswick is beautiful, wonderful old houses, very French towns with sidewalk cafes, highway signs with words like fruit de mere, vent de muebles cemented the fact the French language, people, lifestyle and culture in the Acadian area have been there for two centuries.  I stayed one night along the way and last night, I said to Alice, “Time to head home.” She agreed! 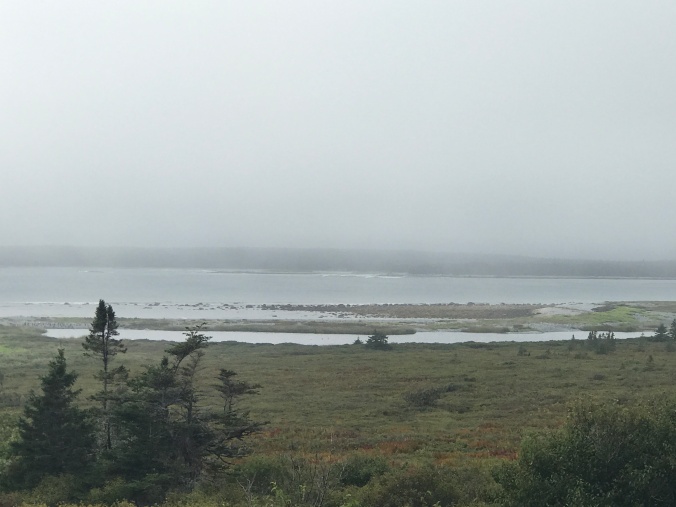 A bit of flora and fauna. 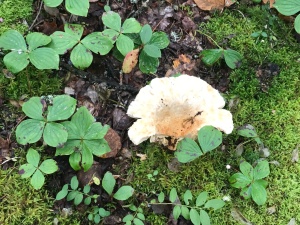 …or under this one? 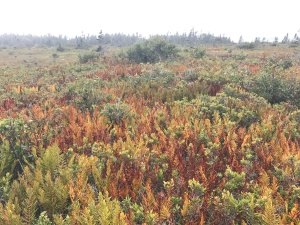 making little paths under these ferns?…

..and eventually coming into open space..

and looking up at this sign and saying “And this means what?” 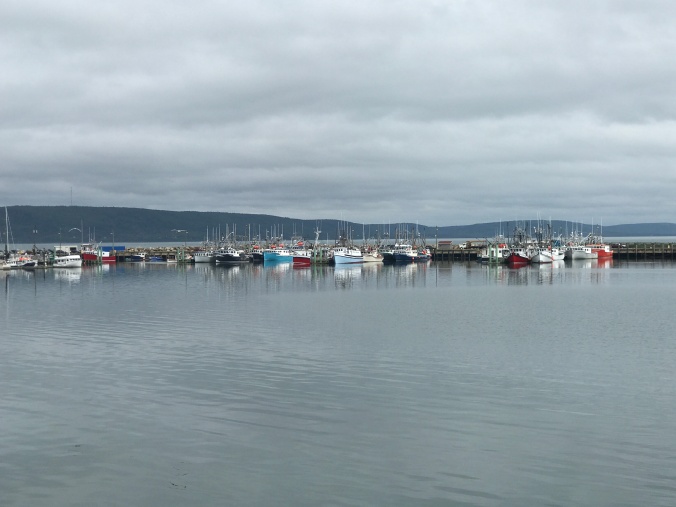 The heart and soul of the Atlantic Provinces

The desert heat sent me on my way on May 15, 2017 and the forests of Northern California and Oregon foretold of what awaited. The unexpected sight of seals along the Oregon coast gave me a glimpse of what this trip had in store.

In Washington, I started down a street which led directly into the ferry’s mouth and I thought I had made a wrong turn someplace, but the ramp lifted and five minutes later I was on my way to Anacortes, Washington. Crossing into Canada, tears came to me because I had realized a life long dream of driving across the northern part of North America. Canada fed into Alaska, the Yukon, the Northwest Territories, across the Canadian Provinces and  to Labrador, Newfoundland, Nova Scotia and now New Brunswick. Ferries and God-awful roads, highways and 2 lane roads, pavement and dirt, Mabel, Alice and I rumbled along and over them. I learned so much about the land, the people, the customs and such different ways of life.

New maps replaced old ones on the dashboard when I crossed the Province lines.  The Trans Labrador Highway knocked the the Garmin GPS system out of its built-in dashboard case. A knife worked well as a shiv between the GPS system and the plastic dashboard holder although the system has not worked since. The iPhone and Google Maps became the compass always with paper maps as a backup and hoping I wouldn’t have to spend ten minutes looking for my reading glasses! I have traveled 22,000 miles and every mile has filled me with wonderment. Some places in this vast Canadian land I hope I will be able to visit again, others well, I’ll probably pass on!

Sometimes I think how do people live there or wonder what they are like in different countries. Each trip I take confirms we are all the same. We cry and laugh, work and play, cook and clean, raise kids and hope they succeed in life, lives are lost and new ones are born—only our environs are different. Those environs shape our outlook towards the world and sometimes it is with awe we look out and other times, it is with disdain or hatred or disgust or unrealized ignorance. The sentient being is still the same though – tears, pain, happiness and laughter all dwell within us. The First Nation people laughed at my trying to filet a piece of buffalo and then became concerned for fear I would slice my hand. The garage man changed my tire and told me what to order at which restaurant. My hand became invisible under his when he shook it and I thought, “What would my impression be of this 6’3″, 250  pounds of muscle and belly in denim overalls if I saw him walking down the street?” I judge so quickly. A park ranger spent 2 hours going theough the van with me fixing all the things that had been knocked loose, fallen off, squeaked and rattled. There is a kindness in most everyone if we want look for it.

It has been a journey. 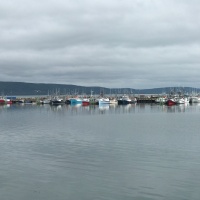