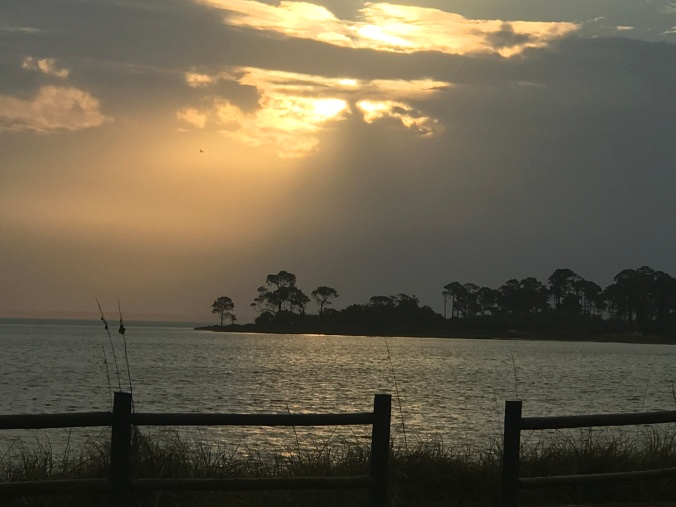 GOBBLE GOBBLE-CAREFUL WITH THAT THROTTLE

I arrived in St. Augustine, Florida on Dec. 2, 2017 stayed there a few days, continued driving the state’s perimeter, stopped in various towns and reconnected with old friends. (See previous post links above. ) My route was St. Augustine, Jensen Beach, crossed over to  Alligator Alley on Hwy. 75, went up the Gulf of Mexico coast-north to Florida’s Panhandle. It is a state of dredged swamp lands, artificial canals, developed lands on landfills, picture perfect gated communities and gorgeous beaches and sunsets to name just a few of Florida’s characteristics. Land “fingers” stretch out into dredged canals to allow million-dollar views of Florida’s legendary sunsets. Replicas of a Moor’s castle or who-can-build-the-largest house along with high rise condos, hotels and timeshares line the eastern coast. This is not to say there aren’t other neighborhoods throughout all this, there are, but they aren’t as visible. Florida is a mixture of lifestyles and landscapes–enticing from a developer’s point of view, destructive and artificial from an environmentalist perspective, welcoming and beautiful and warm from a retiree’s vision for his life’s autumn years–rotate the fish bowl around and different perspectives rise to the surface as a visitor. I knew I had become accustomed to “the scene” after the fiberglass dolphin spouting  clear or blue-tinted water into the air became common place, along with plastic fish mailboxes.

Honestly, I never paid much attention to Florida. In my mind, it was a state filled with retirees wearing pastel clothing, two-piece bathing suits or mind-boggling blue Speedos on elderly people, pink flamingos decorating picture-perfect lawns and  Disney world dominated by sticky-sweet fingers on out-of-control kids. Just a bit of pre-judgment on my part on that one. I began to delve into its history after visiting St. Augustine.

Prior to the 60s, land was cheap, jobs were not plentiful and the population was 4 million, which was low for a state that ranks 22 in land size with Alaska ranked as #1. Hucksters selling “cheap land” in the State had been doing so since the late 1800’s. The phrase “let me sell you some land in Florida” blossomed during the 1960s when the purchaser found  only swamp land at his feet. Then Disney came along and purchased 43 square miles for $185/acre in the mid-60s, opened Disneyworld Orlando in 1971  and the land boom began in earnest. Retirees drove down with a one-way ticket in mind, construction boomed, dirt moved, water diverted, swamps and everglades drained, man-made canals appeared, jobs multiplied–Florida’s environment changed forever. Military bases from all the armed forces began to dot the land with plane hangers, training fields and housing. East and west coastlines could no longer be seen from city streets because high rises blocked the views. The interior remained in agriculture with the export of fruit and vegetables and beef.

Florida, once a sunny paradise that lured new residents with its friendly tax policies and high quality of life, is now paying the price for its rampant population growth. Its open space is vanishing, its highways are clogged with polluting traffic jams, and every day, 860 acres of its forests and farmland are lost to development. Its current population is 18 million and 850 people move in daily. Water is an issue with pollutants and toxins and dead birds and on and on and on……as unchecked civilization spreads in this state.

But, despite all this, with the state’s  burgeoning population, the beauty still reigns. Climate tops the list for the population influx; gorgeous beaches come in a high second; cultural events are bountiful along with every kind of water sport imaginable and can be enjoyed year round. Canadians and Minnesotans alike crave that sun during the depths of winter, and after being in the state, I extended my stay also. The sun sucks you in!

And then….there is Florida’s’ Panhandle: the Forgotten Coast and the Emerald Coast. This  area is  how I imagine Florida before the 1960s.  Wooden one- and two-story homes with rocking chairs and a center table set on a screened-in porch, which served as sleeping quarters, dining rooms and living rooms during the sweltering summer months. Perfection is not in the Panhandle’s vocabulary as demonstrated by free roaming grasses and vines.  I walked through Apalachicola, one of my favorite towns I visited, where vines grew nonchalantly on whatever they could find and  palmetto fronds covered bare spots on the lawns. Houses showed their disitinctive personality and their owner’s taste. Every town it seemed had its “Historical District” and this town was no different. 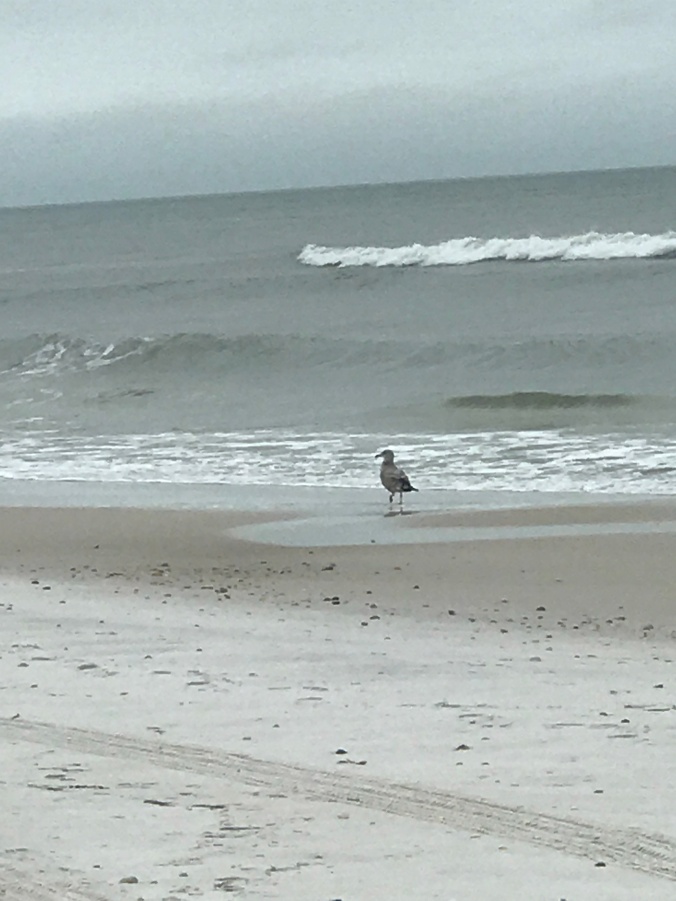 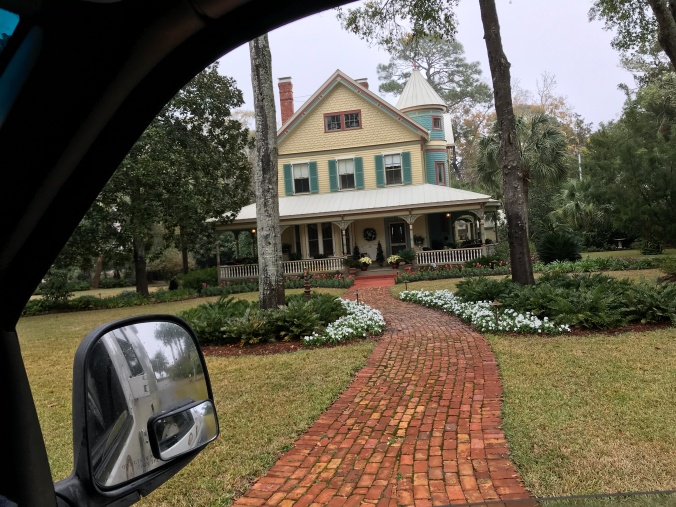 Shotgun House for the slaves

Shotgun houses (12′ wide with three rooms, one after another) believed to have received their name from West Africa and Haitian architecture are prominent in Apalachicola. Built originally for slaves, the town is in process to get funds to restore and sell as affordable housing.

At 35 mph on the roads, I passed trucks pulling flat beds with a John Deere tractor on them. Few traffic lights can be seen in towns. I went to the library and the librarian greeted me warmly and said there was ice tea and coffee in the “side room.”  I ate at more “shrimp shacks” owned by a Don or a Joe or a Billy than I  remember.

St. Joe’s Campground by Port St. Joe was “home” for 21 days. After so many months on the road, a hot shower has become my nirvana. Although dogs are not allowed on the State Park Beaches, just outside the Park there is public beach and Alice ran up and down as I trolled for shells. It didn’t get much better than this. Mabel, my van, was happy because she was stationary for a while!

On our morning beach walks, I passed newly constructed beach houses, new in the sense of 10 years to the present. The older homes were all set back to allow the old sand dunes protect them from high seas. With the new construction, the sand dunes have been essentially destroyed or at least leveled out some.  How long will these remain? When will we realize we cannot control nature?

CUSTOM BUILT INSIDE OF A MERCEDES SPRINTER VAN 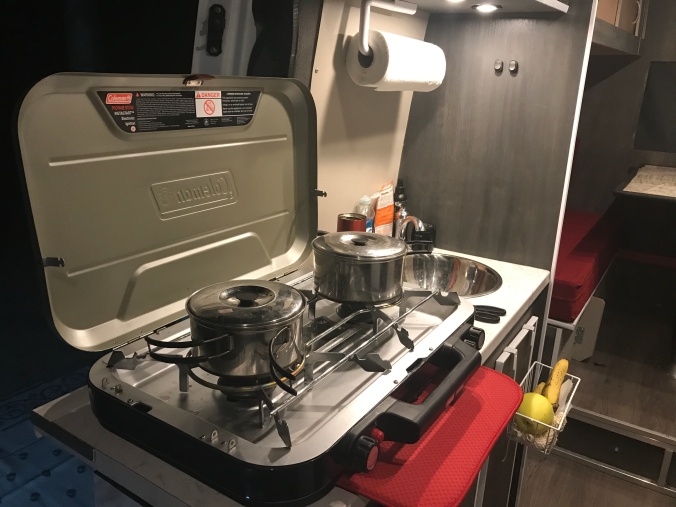 Pensacola is only 175 miles from St. Joe’s so it was an easy trip to the next campground, Fort  Pickens National Park and Campground.

Alice and I wandered along the trail to the fort and it became our morning ritual for 2 weeks. The trail was like an encapsulated version of Florida’s vegetation and wildlife. Birds, armadillos, foliage and water lined the trail that led us to the Fort.

Armadillo–hard to get a photo because it kept scooting away. It used its nose as a plow and pushed through the undergrowth looking for food. 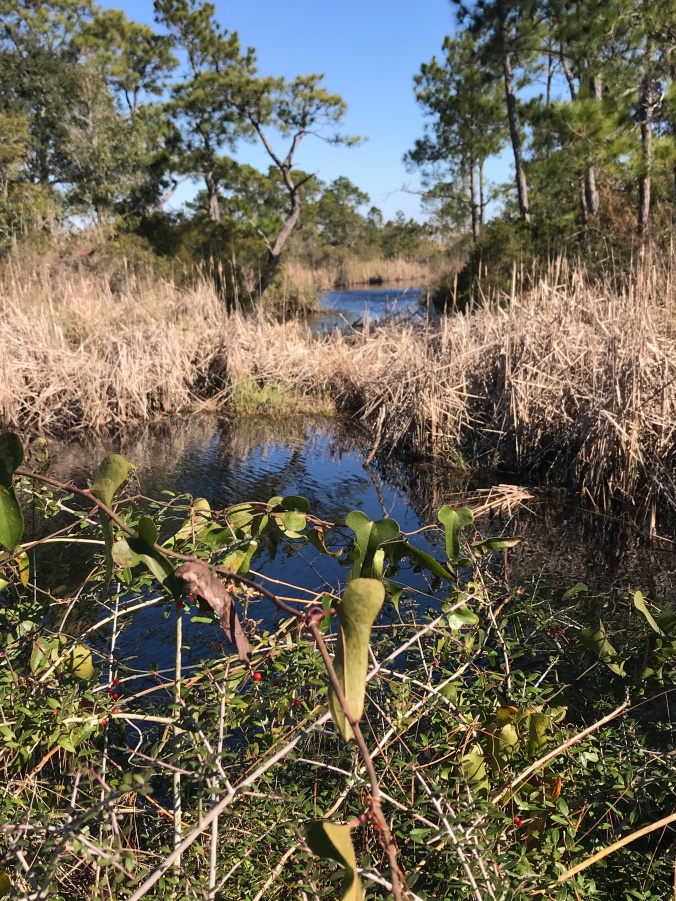 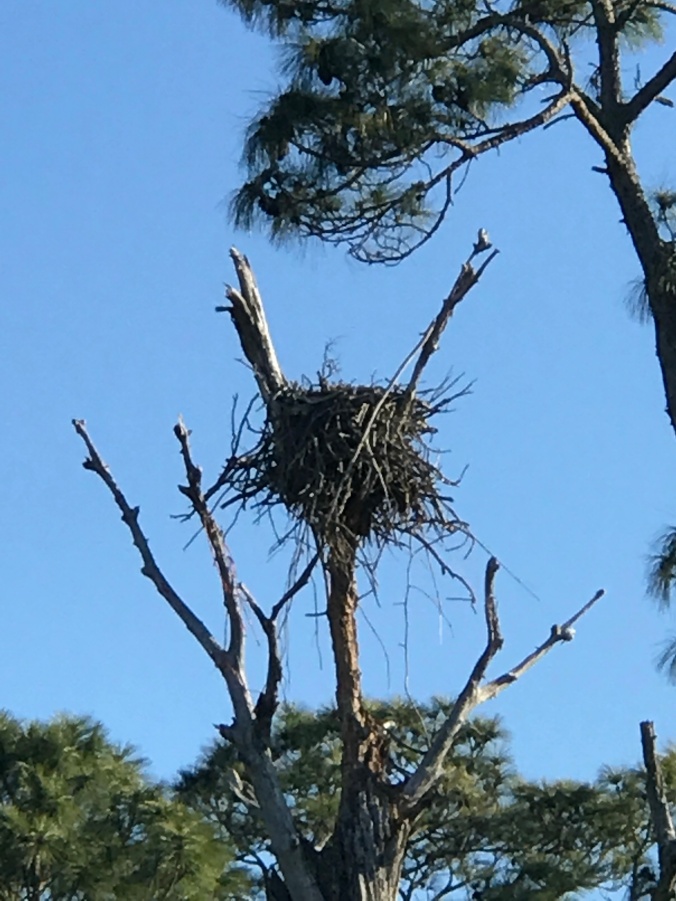 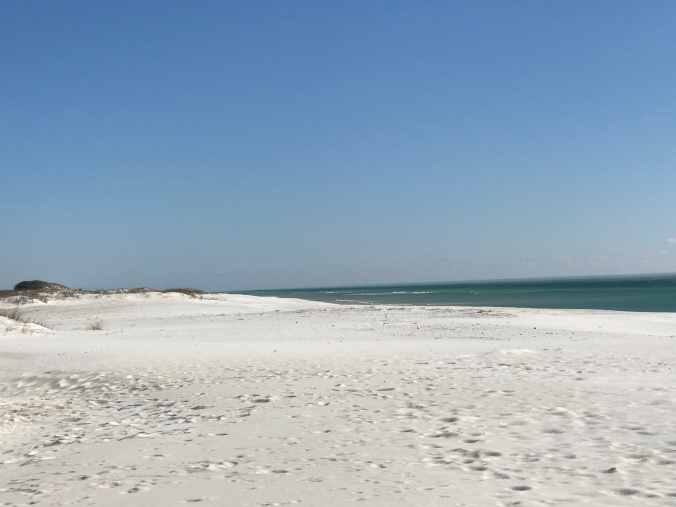 White sands and dunes of the Emerald Coast

This trip has taught me to slow down, look up, look down and around.

Fort Pickens on the Gulf of Mexico’s seashore was built after 1812 when the US decided to fortify its major ports and continued in some military capacity through the end of WWII.  From 1829 – 34, slaves used 21,000,000 bricks to build this fort. 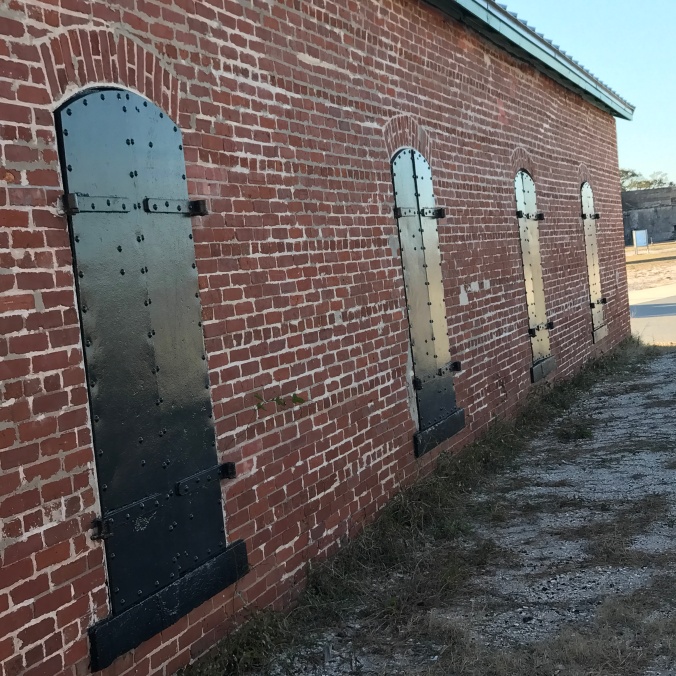 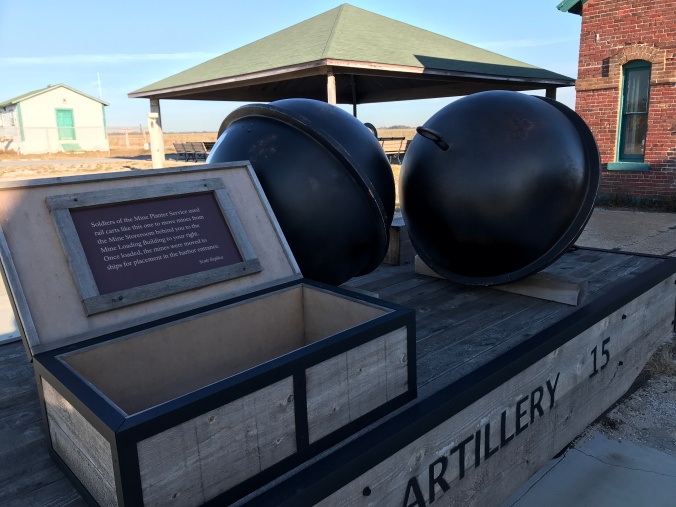 Mines placed in the Harbor’s waters 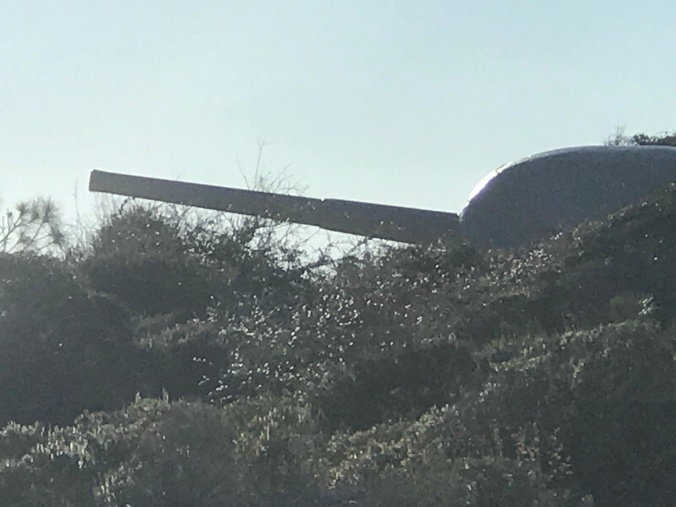 “IT IS A MILITARY TOWN” describes Pensacola. All the military forces have a presence here including the legendary Blue Angels. What a beautiful site this jet is!

The stay in Florida was a bit schizophrenic. The Federal Shutdown happened the last few days at Fort Pickens, which forced me to leave. I stayed at a Walmart lot one night, went to Fort Walton Beach and stayed at a State Reservists visitor center parking lot and woke up to 50 men beginning their Sunday “boot camp” exercises at their training field. An Arctic Freeze blew Florida’s way and temps went below freezing with snow and ice from Tallahassee to Pensacola. It was 70 degrees one day and 24 the next. There was heartbreak of seeing gorgeous beaches ravaged and yet, delighting in them letting the sand grab ahold of me and keep me rooted to stand and gazing and getting lost in the sky. Zooming through Daytona Beach and other “cities” and vegetating in small rural towns enjoying deep-fried fish and chocolate cake made me wonder why do everything so QUICKLY. Every time I got into bed, I cussed out Alice, her paws and the sand because my skin was getting exfoliated massively just by lying down on the sheets. Yet, I couldn’t stay off the beach. I cleaned out the van, sent things back home, gave things to Goodwill, yet collected more shells for the dashboard!  My “short trip through Florida” turned into a seven-week course on a state I never had known but had criticized it without a full understanding. I left knowing I would return and spend another December enjoying the sun in the Panhandle and hope it stays forgotten just a bit longer.

Join my community of followers. Blog posts every 2 or 3 weeks and travel with me. You can cancel anytime. See top right column to follow.  Thanks.